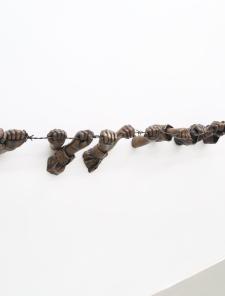 While this group show was conceptualized before the current crises, first COVID-19, with its ongoing and unequal effects, and then the brutal onslaught of police killings of Black people in the United States, these recent events have brought into sharp relief the horrific consequences of mass incarceration in the US, which has the highest number of jailed individuals across developed nations.

With more than two million incarcerated individuals, a majority Black or brown and virtually all from poor communities, the prison industrial complex reveals a troubled nation. Barring Freedom considers the strategies artists use to reveal this racist worldview and the social problems that it effectively creates and obscures. It also highlights alternative visions and future dreamscapes offered by these artists as a counter to the brutalities of our current reality.

“When we are told that we simply need better police and better prisons, we counter with what we really need…We need to be able to reimagine security, which will involve the abolition of policing and imprisonment as we know them…[and] reinvent entire worlds.”

This exhibition underscores the urgency and importance of artists in envisioning a world beyond racist policing, biased courts, and overflowing prisons. Dr. Davis has called for a “great feat of the imagination" to realize dreams of freedom and end the injustices of the carceral system. The artists in Barring Freedom respond to that call.