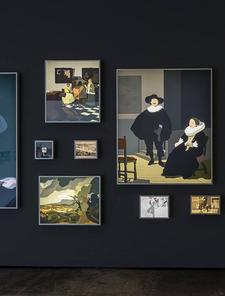 Museum of Contemporary Art Santa Barbara is pleased to present Kota Ezawa: The Crime of Art, a series of light boxes and video animations by Oakland, California-based artist Kota Ezawa that chronicles some of the most infamous and high-profile museum heists in history. At the heart of this exhibition is a series of images paying homage to the 13 artworks—including those by Degas, Manet, Rembrandt, and Vermeer— stolen from the Isabella Stewart Gardner Museum in 1990.

Ezawa’s digital interpretations of the stolen Stewart Gardner masterpieces are presented to scale and illuminated in light boxes that serve as modern apparitions of the centuries-old works. These technological vestiges are at once copies of the originals, while also carrying the mark of Ezawa’s animated hand. Reduced to flat planes of color, the original paintings take on new life as Ezawa plays with ideas of appropriation and originality.

Accompanying the light boxes are video works, including a black and white reproduction of the security footage of the Isabella Stewart Gardner Museum heist.

“My prior drawings exclusively used photographs as source material. This series for the first time draws upon painting only to recognize that painters before 1850, like Rembrandt and Vermeer, were essentially the photographers of their time. In the absence of photographs, their paintings take on the task of recording reality with the scrutiny and minuteness that we now expect from cameras,” says Ezawa.