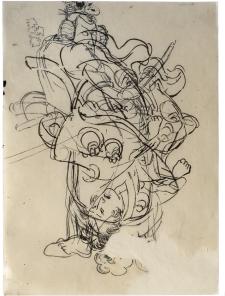 The Pulitzer Arts Foundation presents Living Proof: Drawing in 19th-Century Japan, an exhibition that will explore the methods, techniques, and subjects of drawings during Japan’s late Edo (1603–1868) and early Meiji (1868–1912) periods, highlighting some key practitioners, as well as the primary role of drawing as the first step in the process of creating ukiyo-e woodblock prints. In so doing, the exhibition will shed light on a body of work that, while compellingly expressive and frequently virtuoso in execution, was not treated as an independent art form at the time, lacking even a uniform terminology to describe it. With nearly eighty drawings, on loan from public and private collections nationwide, this is the first museum exhibition of its kind in over thirty years.

Living Proof has been organized by the Pulitzer and is co-curated by independent curator Kit Brooks and Pulitzer Associate Curator Tamara H. Schenkenberg.