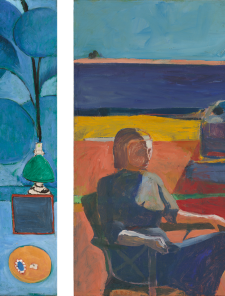 Presenting a new view of two of the twentieth century’s most extraordinary painters, Matisse/Diebenkorn is the first major exhibition to explore the profound inspiration Richard Diebenkorn (1922–1993) found in the work of Henri Matisse (1869–1954). It brings together 100 extraordinary paintings and drawings—40 by Matisse and 60 by Diebenkorn—that reveal the connections between the two artists in subject, style, color, and technique.

The exhibition unfolds across the arc of Diebenkorn’s career—from early abstractions, through his Bay Area figurative years, to his majestic Ocean Park series—all in direct dialogue with works that he knew and admired by Matisse. Diebenkorn grew up in San Francisco, and first discovered Matisse as a Stanford University art student in the early 1940s. Over the next four decades, he pursued a serious study of the great French modernist’s work, drawing from his example to forge a style entirely his own.