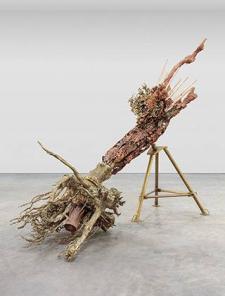 In his first major exhibition at his alma mater, the renowned and provocative contemporary artist Matthew Barney, B.A. 1989, presents his latest work, including a new feature-length film titled Redoubt. Set in Idaho’s Sawtooth Mountain range, the film layers classical, cosmological, and American myths about humanity’s place in the natural world, continuing Barney’s long-standing preoccupation with landscape as both a setting and subject. Redoubt loosely adapts the myth of Diana, goddess of the hunt, and Actaeon, a hunter who trespasses on her and is punished. Like most of Barney’s previous films, Redoubt contains no dialogue; instead, the characters communicate through choreography that echoes and foreshadows their encounters with wildlife.