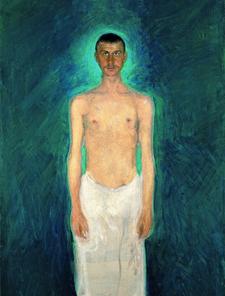 Richard Gerstl (1883–1908) stood at the beginning of a highly promising career when it was cut short by his early death. Along with painting, Gerstl exhibited an extraordinary interest in philosophy, psychology, music and literature. His close contact with the circle of musicians surrounding Arnold Schönberg played a central role in Gerstl’s life. His friendship with Schönberg came to an abrupt end in the summer of 1908, when it was discovered that Gerstl was conducting a love affair with the composer’s wife Mathilde Schönberg. As a result, Gerstl was ostracized by the Schönberg circle and, lonely and isolated, plunged into a depression which culminated in his suicide in the night of 4th/5th November 1908. Owing to Gerstl’s withdrawn lifestyle and his stubborn refusal to present his works in exhibitions during his lifetime – and because his paintings were kept in a depot after his death and were only presented to the public by Otto Kallir-Nirenstein in 1931 – the international art world still considers him somewhat of an artistic outsider with a largely unknown oeuvre. The solo exhibitions of his works presented in 2017/18 at the Schirn Kunsthalle Frankfurt and the Neue Galerie in New York, however, can be regarded as milestones in the rediscovery of the artist. More than 25 years after the last monographic exhibition of his oeuvre in Austria, the Leopold Museum dedicates a comprehensive presentation to this outstanding artist.