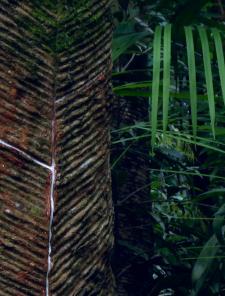 The Brazilian Ministry of Tourism and MASP – Museu de Arte de São Paulo Assis Chateaubriand, present, from July 1 to August 14, 2022, the exhibition Video Room: Melanie Smith, on the 2nd lower ground floor. Curated by Leandro Muniz, MASP Assistant Curator, the exhibition shows Fordlandia (2014), a video showing fragments of the industrial and natural landscape that surround the district of the same name, located on the banks of the Tapajós River in the state of Pará. The exhibition is part of MASP’s Video Room program, offering a deeper examination of audio-visual art practices.

Melanie Smith (Poole, UK, 1965) lives and works between Mexico City and London. Her works, using different media, reflect on the history of painting and its relationship with moving image. Her early works illustrate the behavioral trends of crowds in urban environments, whilst her more current pieces extend to an examination of modernization processes in Latin America. The artist draws on fragmented editing techniques to create film and performative experiences that often allude to what happens backstage.

Fordlandia shows the interaction between nature and the urban landscape, and the ways of life that have emerged over time. Fordlandia was designed in 1927 by Henry Ford (1863-1947) – a pioneer of the automobile industry – as a site to house a rubber plant. Working rules were strict, the workers were supervised by foremen, start and finish times were controlled by clocks and sirens, and the food offered was based on American standards, such as hamburgers. These forms of control led to a rebellion in 1930, which was brutally repressed by the Brazilian Army.

In the 1940s, the rubber trees, which were planted too close together, were attacked by an infestation. In any case, at that time it was already possible to produce synthetic latex in a more profitable way, which led to the closure of the factory in 1945. The workers remained in the district and began to work on agriculture and cattle rearing.

In the film, Melanie Smith depicts the everyday life of the inhabitants of Fordlandia using free associations and non-synchronized image and sound; her scenes draw on forms, textures and colors to create a non-linear narrative. According to curator Leandro Muniz, the video “far from being a denunciation of the perils of modernization, shows the modes of sociability that emerged in the town, beyond its creator’s attempts at control in the 20th century”.