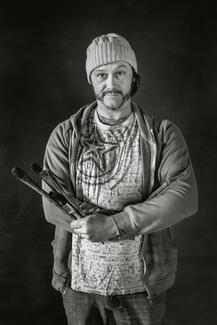 Dex Hannon was born and studied in Manchester and now resides in Yorkshire. Based at SOPA Creativa studios in Huddersfield. His work has sold all over the world and is part of several private collections, he has featured in books and magazines, recently chosen as one of the top 50 artists for the magazine Art Share Love. His work is influenced by artists such as Mark Rothko and Gerhard Richter.

I go where the idea takes me. The idea drives the choice of medium. I paint. I make and use sounds. I take photos, I also shape sentences into interesting stories.

Predominantly using contrast, through mixing of styles, techniques and bold choices I creates a battle of foreground and background and attempt to distort and disrupt the status quo.

My current works are created ‘alla prima’ mixing the oils or acrylics directly on the canvas surface, working fast in rapid strokes, letting the freedom of the moment and sounds influence movements of the brush, interlocking raw strokes repeating to form distance and illusion of space, connections and disconnections. This style of working is intense, and always filled with danger.

One stroke too far and the painting is lost.