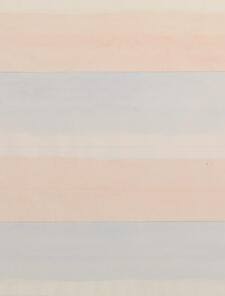 Filling the Guggenheim rotunda, this exhibition will trace Agnes Martin’s (1912–2004) career from her early experiments of the 1950s through her mature oeuvre and final paintings, making it the first comprehensive survey of the artist’s work since her death in 2004. One of the preeminent American painters of the twentieth century, Martin created subtle and evocative canvases that had a significant influence on artists of her time and subsequent generations. For more than four decades, she explored limited compositional motifs yet discovered endless nuance and variation. By 1960, she had developed her signature grid-pattern works—radical presentations of interlocking horizontal and vertical lines in pencil on large square canvases that at first seem to appear blank. Martin’s geometry, however, is never mechanical.