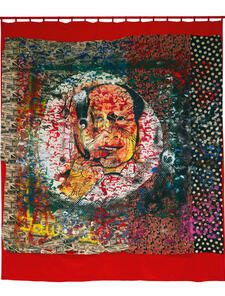 The Museum of Modern Art presents the first comprehensive retrospective of Sigmar Polke (German, 1941–2010), encompassing Polke’s work across all mediums, including painting, photography, film, drawing, prints, and sculpture. Widely regarded as one of the most influential artists of the postwar generation, Polke possessed an irreverent wit that, coupled with his exceptional grasp of the properties of his materials, pushed him to experiment freely with the conventions of art and art history. Constantly searching, Polke studiously avoided any one signature style or medium; his method exemplified the definition of alibi, “in or at another place,” which also suggests a deflection of blame. This exhibition places Polke’s enormous skepticism of all social, political, and artistic traditions against German history and the country’s transformation in the postwar period.