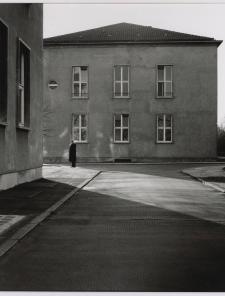 Benjamin Katz became known in the 1980s as a fixture of the art scene in West Germany. He took portraits of artists such as Georg Baselitz, James Lee Byars, A.R. Penck, Cindy Sherman, and Rosemarie Trockel, photographed the bustling art scene at openings, and documented the creation of major exhibitions such as Westkunst in Cologne in 1981, documenta 7 in Kassel in 1982, and von hier aus in Düsseldorf in 1984.

On the occasion of the eightieth birthday of Benjamin Katz (born on June 14, 1939, in Antwerp, Belgium), the Museum Ludwig will present his series of photographs Berlin Havelhöhe (1960/1961), which has never before been shown in its entirety. The series was recently acquired directly from the artist’s archive. Even before Katz devoted himself professionally to photography, he captured his surroundings in 1960 and 1961 during an eighteen-month stay at the Havelhöhe hospital. Suffering from tuberculosis, he spent his time there as a patient and photographed everyday life: his fellow patients, the hospital staff, the buildings built during the Nazi era as an air force academy, and the surrounding area. The photographs represent a socio-historical as well as an artistic and personal document, since they record Katz’s beginnings as a photographer. Berlin Havelhöhe also exemplifies an image of the artist as a young man.