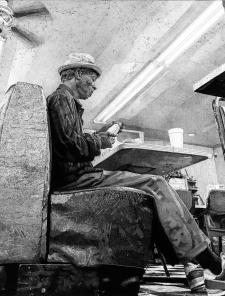 Yeelen Gallery is proud to present “Black Freedom,” a series of works by the Miami-based French-American artist, Jerome Soimaud. Known for his intricately detailed, large-scale works of charcoal and graphite on canvas, this exhibition features pillars of the Civil Rights Movement in Miami, anchored by a tribute to the last hours of Jumbo’s Restaurant, an iconic symbol of the undoing of American Jim Crow. With an aim to curate a program that is both a reflection of and an international voice for the under represented, this exhibit celebrates Black History as the nation faces a crisis of racial and socio-economic divide.
The subjects of Soimaud's canvas pays homage to a bygone era of de jure segregation, while revealing the bastions of the psychological color line still separating the races in his Miami Community. “Black Freedom” reminds the viewer that the fight for equality is not yet at an end, and calls for a new era of activism.