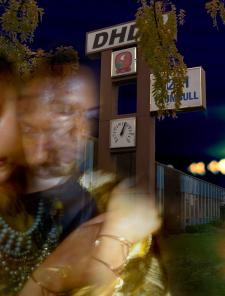 Dance Marathons would often last several weeks or even months. A mix of the heroic and grotesque, of kitsch and desperation, these endurance contests were meant to challenge the capacity of the individual will. While they challenged many gender and class expectations, they were vehemently racially segregated. ‘Blind Sum’ examines the repercussions of such omissions in the creation of mythic space. This work emblematizes the common contests of persistence and defiance, and the desire to live beyond the capacities that we have internalized.