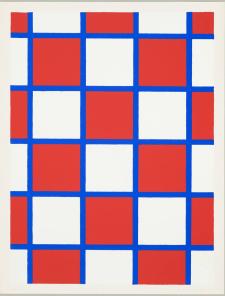 The German artist Peter Heisterkamp (1943–1977), who named himself after the mafioso Frank "Blinky" Palermo, is known for his objects, installations, and above all for the bright color fields of his fabric and metal pictures, which supposedly directly illustrate what they conceptually question: the sensual qualities of contemporary painting. Less well known yet no less clever and stimulating are works he created in editions: screen prints and offset prints, lithographs, objects, and a template for painting. Palermo made these editions throughout almost his entire career. They not only reflect his development from the 1960s to his early death in 1977, but also represent a deliberate expansion of his work.

In the medium of reproduction, Palermo radicalized two fundamental questions: doubts about image and work, as well as the reflection on industrial form and color implemented in art. The abstract content, the emblematic nature of a concrete form—Palermo’s subject from the very beginning—is even more apparent in print. At the same time, the editions also preserve the real content of the signs, their materiality: what the artist carefully conceived and often worked on by hand during the production process is reproduced. Palermo used the technique of serial production to determine the change in status of art (and this also means his own work) in the age of technology: showing this is the aim of the exhibition.