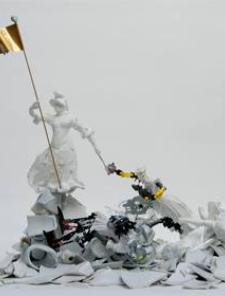 War and Pieces is a 26-foot installation by artist Bouke de Vries, inspired by the sophisticated figural centerpieces that decorated 18th-century European banqueting tables. Displayed during the dessert course on special occasions, these figures, first made of sugar and later made increasingly of porcelain, told stories or conveyed political messages to the diners.

Bouke de Vries draws on such traditions in the modern centerpiece, arranged around the mushroom cloud from a nuclear explosion whose force appears to have turned the entire table into a wasteland. Battle rages across a heap of porcelain shards, old and new, fought by myriad miniature figures with conventional arms. Jesus on the cross and the Chinese Buddhist goddess of compassion, Guanyin, watch over the death and destruction. Brightly-colored contemporary plastic toys—indestructible symbols of our own toxic times—contrast vividly with the pure white of the porcelain and sugar.

Born in Utrecht, the Netherlands, de Vries began his career as a textile designer, but then changed paths and studied ceramics conservation. Daily encounters with broken and fragile works inspired him to make his own sculptures. Using his skills as a restorer, his artworks reclaim broken pots and ceramic sculptures; instead of reconstructing them, he deconstructs them, emphasizing their new status, installing new virtues, and moving their stories forward.