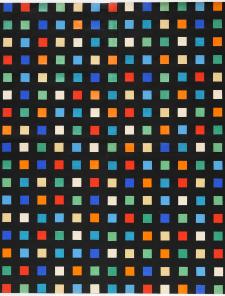 Ellsworth Kelly’s last great work, the monumental stone building entitled Austin now being realized at the Blanton Museum, has its roots in the artist’s deep appreciation of historical European art and architecture. This exhibition will explore how Austin’s conceptual origins began in the seminal period Kelly spent in France (1948-54), when he immersed himself in the country’s artistic traditions and monuments. Rarely seen early paintings and drawings fuse Judeo-Christian themes with the artist’s own modern aesthetic, making clear Austin’s decades-long germination. This section will also include the first models and designs for the building’s initial conception in the mid-1980s. Four other expansive sections will elucidate Kelly’s rich explorations of Austin’s four main motifs: Spectrum, Black and White, Color Grid, and Totem. These formal concepts were deeply meaningful to him throughout his career, and he created them in drawing, painting, printmaking, and sculpture.