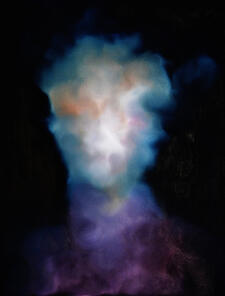 Just like contemporary ignis fatuus (“will-o’-the wisps”), there in Alan Stefanato’s paintings, appear little flames of a thousand variations of Prussian Blue, but also clouds and mists of all the infinite possibilities of white lacquer Monaco scenarios emerging from the Kassel brown earth, concealing and revealing presences, beings and ambiguous figures. An imaginarium nurtured by Eastern spirits of a subculture steeped in pop manga and significant suggestions of the Venetian landscape. On the canvas, things appear and disappear, depart and return. The watery visions seduce the viewer into an evocative game, having originated from the decomposition of the human figure and the landscape, they burn and shine in their last flames of light and life.
Was born in Trieste in 1992. Lives and works in Muggia (Trieste), Italy.
The exhibition will be held until the 31st December 2014, from Tuesday to Saturday from 4pm and at 8pm by appointment.