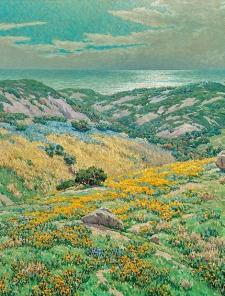 Widely considered one of California’s top early artists, Granville Redmond (1871–1935) produced a body of work that captures the state's diverse topography, vegetation, and color. His paintings range in style from contemplative, Tonalist works that evoke a quiet calm, to dramatic and colorful Impressionist scenes.
Born in Philadelphia, Redmond contracted scarlet fever as a toddler, which left him permanently deaf. Soon after, his family moved to California. Today, Redmond is best known for his colorful Impressionist oils depicting the California landscape ablaze with poppies and other native flora.
Silent film star Charlie Chaplin, Redmond’s friend and supporter, said of these paintings, “There’s such a wonderful joyousness about them all. Look at the gladness in that sky, the riot of color in those flowers. Sometimes I think that the silence in which he lives has developed in him some sense, some great capacity for happiness in which we others are lacking.”
This exhibition, the largest ever assembled of the artist's work and the first in more than 30 years, includes approximately 85 signature paintings.