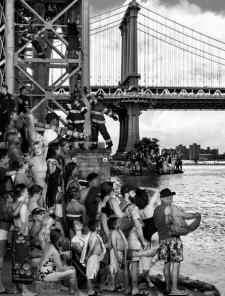 The Brooklyn Museum presents JR: Chronicles, the French artist’s largest solo museum exhibition to date. The presentation covers nearly 20,000 square feet of the Museum’s Great Hall and traces JR’s artistic evolution since 2001, focusing on his commitment to community and civic discourse through the use of large-scale media such as news and advertising as well as architectural interventions. Working at the intersections of photography, social practice, and street art, JR’s participatory projects have fostered collaborations and conversations around the globe. The exhibition centers on The Chronicles of New York City, a new monumental mural incorporating the portraits and stories of over one thousand New Yorkers. The immersive installation also features JR’s most well-known works across photography, installation, film, and video from the past fifteen years, including his first major collaborative project, Portrait of a Generation (2004-6); Face 2 Face (2007), Women Are Heroes (2008-9), Inside Out (2011-ongoing); and The Gun Chronicles: A Story of America (2018).