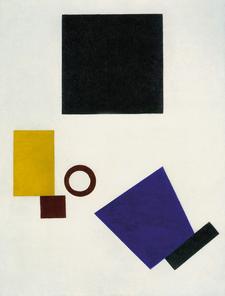 Kazimir Malevich (1879–1935) is one of the most influential artists of the twentieth century. In the West the painter, theoretician and teacher is best known as the originator of Suprematism, an art movement based on pure, non-objective abstraction. But his oeuvre is rooted at the crossroads between abstraction and figuration, between a universal idea of what it is to be human and the declared ambition to create a new world through art. Presenting a wide selection of paintings, prints and sculptures totalling more than 300 works, the exhibition sheds light on the key phases of Malevich’s career, from the Symbolist beginnings through his pioneering abstract works to the figurative paintings of his later years.
Unprecedented in its scope, the exhibition draws on the support from numerous international lenders. It is the first retrospective to present large groups of works from the collections put together by Nikolai Khardzhiev and George Costakis.