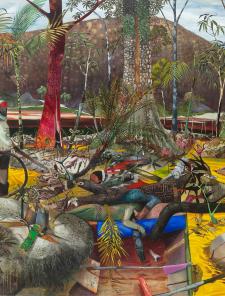 MASP — Museu de Arte de São Paulo Assis Chateaubriand presents, from April 1st to June 5th, 2022, the exhibition Luiz Zerbini: a mesma história nunca é a mesma [The Same Story Is Never the Same], occupying the second underground floor of the museum. Curated by Adriano Pedrosa, artistic director, and Guilherme Giufrida, assistant curator at MASP, the exhibition gathers around 50 works, among which are paintings, monotype prints, engravings, and drawings, most of them presented for the first time and presented with an exhibition design-artwork conceived in dialog with the architecture of the space.

Luiz Zerbini (São Paulo, Brazil, 1959) moved to Rio de Janeiro in the early 1980s, when he also started his artistic career. Over time, the research through a wide range of techniques, experimenting with painting, collage, video, and installation, became a signature of his work. Although not retrospective, the exhibition encompasses pressing issues and works for the artist, questions that have been somehow following him since the onset of his production. The show intends to create new landscapes for the history of Brazil by means of an immersive experience composed of paintings, monotype prints, and objects from nature.

The solo show starts from a painting he made back in 2014, called A primeira missa [The First Mass], commissioned for the group show Histórias Mestiças [Mestizo Histories] held that same year at Instituto Tomie Ohtake, in São Paulo, Brazil. In this work, ‘Zerbini questions the imagination produced by the famous painting Primeira missa no Brasil [The First Mass in Brazil] (1860), by Victor Meirelles (1832-1903), reinventing the image and the very narrative of the first days of the notorious encounter between invaders and indigenous people in the early days of the Brazilian colonial process,’ as remarks curator Guilherme Giufrida. In this case, the sense of reconstructing history occurs through a displacement of perspective: now, the intention is to see this scene of a world being invaded by the arrival of the Portuguese through the eyes of other subjects, whether they are humans, plants, or animals.

As Giufrida describes, ‘the artist takes on the gesture of combining images that have solidified as an illustration of facts that were actually invented by them. It is then a matter of reimagining histories by assigning them new representations and allowing other ideas and protagonists to emerge.’ Therefore, the exhibition intends to make use of such a procedure to approach different moments and conflicts that are part of the history of the country. Examples of this are the four large-format paintings elaborated especially for the show: Massacre de Haximu [The Haximu Slaughter] (2020), Paisagem inútil [Useless Landscape] (2020), Rio das Mortes [The River of Deaths] (2021), and Canudos não se rendeu [Canudos Did Not Surrender] (2021).

The set of paintings is joined by a selection of tens of monotype prints from the Macunaíma series (2017), conceived for a special edition of the novel Macunaíma: o herói sem nenhum caráter (1928), by the writer Mário de Andrade (1893-1945). In them, Zerbini translates the book’s narrative—which tells the life story of an indigenous character and the intense transformations he goes through—by appropriating the native vegetation surrounding the protagonist, which becomes evident on paper.

Other than that, the solo show also integrates two installation works—one of them composed of roots of plants from the artist’s studio—in addition to the exhibition design itself, an appropriation of the classic dispositif—a major modular wood structure—designed by Lina Bo Bardi (1914-1992) for the exhibition Cem obras-primas de Portinari (1970), by Candido Portinari (1903-1962), also held at MASP, with some changes in the design as well as painted interventions proposed by Zerbini.

Increasingly more interested in botanical issues and discussions (even philosophical ones) around the universe of plants in the past few years, the artist started to reflect such theme in his production since the early 2000s, incorporating to it both a dialog and a concern with this cause, in addition to the demands of indigenous populations, especially in the fight against artisanal mining and other forms of invading their territories nowadays.

Luiz Zerbini: a mesma história nunca é a mesma [The Same Story Is Never the Same] is part of MASP’s biennial program dedicated to Brazilian Histories in 2021-22, in the occasion of the bicentennial of the independence of Brazil in 2022. This year, the program also includes exhibitions by Abdias Nascimento (1914-2011), Dalton Paula, Joseca Yanomami, Madalena dos Santos Reinbolt (1919-1977), Judith Lauand, and Cinthia Marcelle, in addition to a major group exhibition, Brazilian Histories.