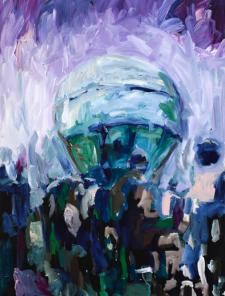 Maleventum, Gianluca Capozzi’s personal exhibition, curated by Raul Zamudio will remain open until July 31st. The exhibition features a series of the most recent pictorial works by the young Italian artist from his international route.

Consisting of painting, the title is culled from two sources. One comes from Benevento's ancient Roman description: Maleventum, which translates as "site of bad events". Maleventum was considered so ominous that its name would be changed by Romans to something more benign: Beneventum; and finally to its current nomenclature as Benevento. The other allusion in the exhibition's title is more contemporary, for it comes verbatim from the similarly named album by the Italian Death Metal band, Opera IX