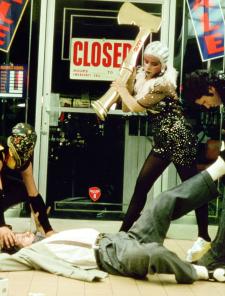 The exhibition Mapping the Collection takes a new look at two influential decades in American (art) history: the 1960s and 1970s. The exhibition presents a selection of artworks from the Museum Ludwig’s collection by female, queer, and indigenous artists as well as artists of color who are not represented in the collection, as an impetus for a broader reception of American art.The political and social events and developments of these two decades form the background against which our Western European conception and reception of American art history is critically questioned.

From a European perspective, when we think of the 1960s and 1970s in the United States we mainly remember the African-American civil rights movement, the assassinations of John F. Kennedy and Martin Luther King Jr., and the protests against the Vietnam War. However, we know little about the Brown Berets, the activists of the American Indian Movement, or the beginnings of gay liberation. Characteristic examples of art from this period include works by Andy Warhol, Roy Lichtenstein, Donald Judd, Robert Smithson, Robert Rauschenberg, and Robert Indiana. African-American artists, on the other hand, are barely present in the narrative of twentieth-century American art, and indigenous or Latinx artists even less so. Yet they of course also made important contributions to the development of art and culture in the United States.