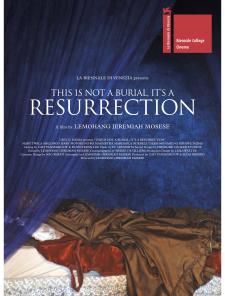 Official poster for the Venice Film Festival premiere of 'This is not a burial, it's a resurrection'
Exposition
Gratuit
Photographie
Vidéo

MUSEO MEà PRESENTS PHOTOGRAPHIC EXHIBITION AND SCREENING OF LEMOHANG JEREMIAH MOSESE'S: 'THIS IS NOT A BURIAL, IT'S A RESURRECTION' Exposition collectiv

Meano, Italy - Museo Meà and Associazione Asilo Dei Creativi are proud to present the most recent feature film by LEMOHANG JEREMIAH MOSESE (Lesotho). The film was produced through the Biennale College Cinema program of the Venice Biennale and will have it's world premiere on the 29th of August at the Venice Film Festival. The Filmakker will be present, as will the producer CAIT PANSEGROUW (South Africa) and the cinematographer PIERRE DE VILLIERS (South Africa). After the screening of the film there will be a short Q & A. Accompanying the screening will be an exhibition of a series of still images from the film.

In a small village nestled amongst the mountains of land-locked Lesotho, an 80 year old widow awaits the return of her only surviving family member: her son, a migrant worker labouring in a South African coal mine. It is Christmas and he is due home. Sombre messengers deliver the news: her son has died in a mining accident. Distraught by the sudden news of his untimely death, Mantoa struggles to find meaning in her existence.