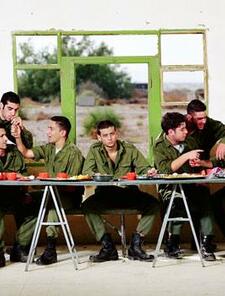 This exhibition presents a multi-voiced dialogue between the works of visual artist Elie Shamir and of art photographer Adi Nes, combined with an interpretative perspective. Both artists use elements that echo Greek and Canaanite mythology, the Old and New Testaments, Jewish history and the Zionist ethos. Laid in layers, these myths form almost an archeological stratigraphy of Israel's landscape and of its cultural, national, political and socio-economic state. Both artists are preoccupied with similar themes - personal versus collective identity; norms and human values; preservation of the national ethos versus the moral obligation to one's own conscience.
The paintings of Elie Shamir (b. 1953) echo art masterpieces. Being mostly autobiographical, they allude to the Jezreel Valley, which played a central role in the history of Zionism. Shamir's works raise questions about the male pioneer ethos and the collapse of the "Valley" myth, as a metaphor for the erosion of the nation's values.
In the photographs of Adi Nes reality meets the artist's meticulous and carefully staged working process. Sharp and intense, yet poetic and gentle, his works combine homage to iconic figures. His images undermine central narratives of Israeli culture and advance the formation of new ones. His series from the 2000's - Soldiers, Boys, Prisoners, Bible Stories and The Village - deals with complex issues such as Israeli identity, militancy and human compassion