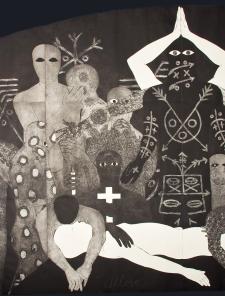 This landmark retrospective is the first in the U.S. dedicated to the work of Belkis Ayón (1967–1999)—the late Cuban visual artist who mined the founding myth of the Afro-Cuban fraternal society Abakuá to create an independent and powerful visual iconography. Ayón was known for her signature technique of collography, a printing process in which materials of various textures and absorbencies are collaged onto a cardboard matrix and then run through the press with paper. Her narratives, many of which were produced at very large scale by joining multiple printed sheets, are imbued with an air of mystery, in part due to her deliberately austere palette of shades and subtle tones of black, white, and grey. For a black Cuban woman, both her ascendency in the contemporary printmaking world and her investigation of a powerful all-male brotherhood were notable and bold.