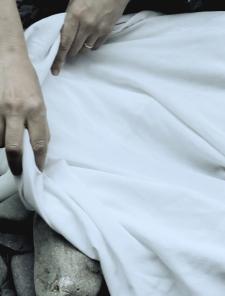 Emma Elliott is a British artist whose central concerns are the incongruous and hypocritical aspects of humanity.
Classically trained in painting and figurative sculpting both in the UK and Italy, her excellence in craftsmanship and technique is matched by a fearless questioning of ideologies, religion, ancient and modern society – the universe.
Exposition
Gratuit
Sculpture

At the core of Reconciliation is a sculpture inspired by Emma Elliott's visit to Israel's Holocaust museum in 2012 and subsequent visits to Auschwitz and Jerusalem. Reconciliation is the artist's response to the suffering humans inflict on one another and is a visual interpretation of reconciling two Jews by sharing their respective wounds in a single object.

Despite its obvious references to Christian and Jewish history, the sculpture is not to be interpreted in a purely religious context. Its theme of remembrance and survival is relevant to people of any or no faith: Reconciliation invites us to reflect and consider our role in a world increasingly dominated by inhumanity and indifference. It provides an antidote to headlines monopolised by callous politicians, news of civil conflict and an ongoing global refugee crisis.

The London launch of Reconciliation coincides with the introduction of Emma's first limited edition for digital art platform Sedition. The exhibition will