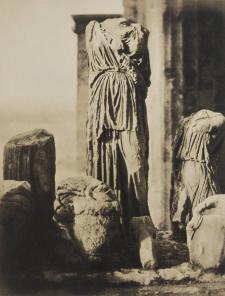 The ruins of the Acropolis appear to stand silently in Felix Alexander Oppenheim’s photographs from 1853. No people are visible, and modern-day Athens remains out of view. In 1854 forty-two of his photographs were published in the large-format album Atheniensische Alterthümer, devided into two volumes: Die Akropolis and Details der Akropolis. The Museum Ludwig holds one of the two surviving copies; the second is at the J. Paul Getty Museum in Los Angeles. Like Paul de Rosti, whose photographs from South America for Alexander von Humboldt the Museum Ludwig presented last year, the lawyer Oppenheim learned photography from Gustave Le Gray in Paris. Previously a jury in Cologne had acquitted him and his friend Ferdinand Lassalle of stealing documents, thus precluding any possibility of a legal career. And so Oppenheim traveled. But the much-cited “silent grandeur” of the ancient relics, as captured by Oppenheim, does not obscure the traces of looting and destruction, as well as archaeological recovery. For instance, in his introductory texts Oppenheim speaks of the “genius and great mastery with which the ancients knew how to treat this branch of art [sculpture]” and at the same time of “rummaging in foreign countries” and the “abduction” of sculptures. For the first time, the full album will be on view. It reveals a moment in history when the enthusiasm for antiquity, early archeology, the Greek symbol politics, and the struggle for rightful ownership created for these silent