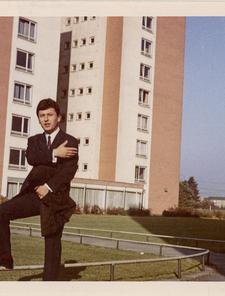 As a counterpart to the deserted shots of the “guest worker towers,” Ela Kaçel discovered per-sonal photographs taken by the residents in front of and inside the buildings. This led her and the curator Barbara Engelbach to the question of how labor migration in cities is represented in public photographs between 1955 and 1989 and how migrants photographed themselves as residents of the city. How does their photographic practice locate them and thus help contrib-ute to the memory of specific cities and places?