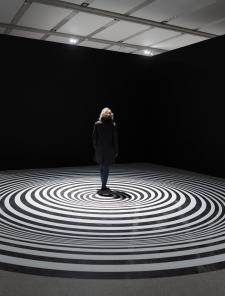 Vertigo. Op Art and a History of Deception 1520–1970 Exposition collective

Of all the art movements of the 1950s and 1960s, op art has hitherto received the least attention. Often it is denigrated as being too spectacular and superficial. This is a misconception—this art sharpens our awareness of the ambiguity of appearances and illustrates the impossibility of grasping “reality.” Under the title Vertigo, mumok presents a deceptive game of the senses, presenting a wide spectrum ranging from panel paintings, reliefs, and objects to installations and experiential spaces, to film and computer-generated art.
Op art works are by no means only directed at our sense of sight. With their powerful effects and optical illusions they lead to experiences of sensory overkill, which can then affect the whole body. In all of this, op art remains indebted to the anti-classical. In this sense, the exhibition also includes references to anti-classical art from the sixteenth to the eighteenth centuries and to precursors from the first half of the twentieth century, works that also use pulsating patterns, beating and ephemeral after-images, paradoxical illusions of space, and other methods of optical illusions

This exhibition was initiated by mumok and is implemented in cooperation with Kunstmuseum Stuttgart, where it will be shown in late 2019. Vertigo. Op Art and a History of Deception 1520–1970 is generously supported by the Art Mentor Foundation Lucerne.