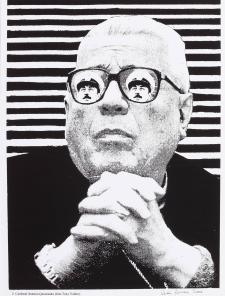 We Did Not Know León Ferrari

The exhibition, which brings together fifty works, belonging to the museum, by the Argentinian, is organized by the Núcleo de Curadoria e Pesquisa (Curation and Research Centre) of Pinacoteca and emphasises the political aspect that characterised Ferrari’s production, charged with scathing criticisms of art institutions, political systems and the contemporary morality of the 1960’s and 1970’s. This is the first time the museum exhibits two complete series from its collection of works by the artist, who died in 2013.

For this exhibition, the Pinacoteca presents two series, which the artist donated to the museum, from a set of 33 works donated at the time of his exhibition Poéticas e políticas, 1954-2006, curated by Andrea Giunta, which took place at the institution in 2006. This process of donation continued into a second stage, in 2008 - when further works were added to the set – and was completed in 2014, through the artist’s granddaughter, Anna Ferrari, one year after his death. Valéria Piccoli, chief-curator at the Pinacoteca, comments: “The series exhibited here were never shown in their entirety. They all start from one mode of working, namely the artist’s intervention on the pages of vehicles of communication. Ferrari explores the narrative power of images, interfering in them as a means of potentializing the messages they convey”.