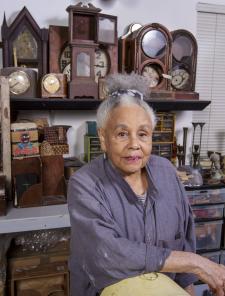 Betye Saar will be awarded the twenty-sixth Wolfgang Hahn Prize from the Gesellschaft für Moderne Kunst. This recognition of the artist, who was born in Los Angeles in 1926 and is still little known in Germany, is highly timely, the jury consisting of Yilmaz Dziewior, director of the Museum Ludwig; Christophe Cherix, Robert Lehman Foundation chief curator of drawings and prints at the Museum of Modern Art (MoMA) in New York; and the board members of the association decided. For more than fifty years, Betye Saar has created assemblages from a wide variety of found objects, which she combines with drawing, prints, painting, and photography.

For more than twenty-five years, the association has been awarding the Wolfgang Hahn Prize and has acquired a work or group of works by the prize winners. “Here the idea of civic participation comes together with the desire to support the museum’s vision for the future,” says chairwoman Mayen Beckmann. “We are delighted to honor Betye Saar, an artist whose great work is rooted in American art. She will add a previously missing, central position to the collection of the Museum Ludwig, in which many American artists are represented. In her wide-ranging oeuvre—which draws from shamanistic, religious, and philosophical sources, is composed of found items, and is politically motivated by ‘black feminism’—she takes us into her own world, which oscillates between dream, memory, and experience.”