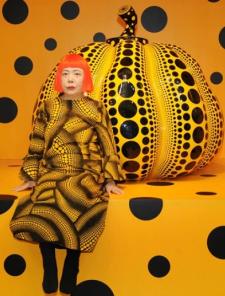 Within a few years, Yayoi Kusama (born 1929) has become a favourite of Louisiana’s guests because of her Gleaming Lights of the Souls installation at the museum – a mirror-lined room with hundreds of lamps in various colours that give the viewer a cosmic sensation of being in an infinite space.

But with a career spanning six decades, Kusama is much more than this. She came onto the art scene almost as a woman counterpart to Andy Warhol in New York in the 1960s, where she expressed herself in a mixture of art, fashion and happenings. Since then, her striking visual language and constant artistic innovation have rightfully earned her a position as one of today’s most prominent artists. Louisiana’s exhibition of Kusama tells the full story of this Japanese artist who with prodigious productivity has created an entire world unto itself, in which color, patterns and movement together bear witness to her fascination with the infinite.