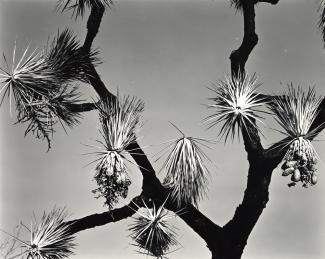 Recognized for his bold, abstract compositions of Western American landscapes and natural forms and for his daring printing style, Brett Weston was a leading photographer of the early twentieth century. From July 22, 2022 through January 22, 2023, the San José Museum of Art (SJMA) will present Brett Weston, featuring fifty photographs drawn exclusively from the permanent collection of the San José Museum of Art.

The growth of SJMA’s permanent collection of photography has benefited primarily from the acquisition of in-depth bodies of work or single portfolios by individual photographers. The acquisition of this collection represents the most significant group of photography by an artist to enter the Museum’s collection. Additionally, the Museum has a history of presenting innovative exhibitions of photo-based artists such as This Is Not a Selfie: Photographic Self-Portraits from the Audrey and Sydney Irmas Collection, David Levinthal: MAKE BELIEVE, and Annie Leibovitz: Pilgrimage, among others.

Spanning approximately 40 years from the 1930s through the 1970s, the new exhibition of Brett Weston will feature images of natural landscapes and seascapes near Big Sur and Carmel, California; the Oregon Coast; and White Sands, New Mexico; as well as from three major portfolios: "Baja California," "Abstraction I," and "Abstraction II."

“Although Weston traveled the world extensively, he spent a great deal of his life in California. So, it is only fitting that we display Weston’s work at SJMA,” said Rory Padeken, curator, San José Museum of Art. “Throughout his career, Weston transformed close ups of familiar subjects into beautiful and mysterious abstractions which became his signature style. He had a keen ability to extract a detail from the larger context and these carefully chosen subjects—twisted branches, tangled kelp, rock formations, cracked mud, and knotted roots—remained enduring motifs in his work.”

“This group of photographs offers a broad view of Weston’s practice over his nearly seventy-year career. It is an important addition to the Museum’s growing photography collection, and we were honored that the Christian Keesee Collection gifted them to us. We are delighted to be able to share them with our visitors,” said S. Sayre Batton, Oshman Executive Director, San José Museum of Art.

The second son of acclaimed photographer Edward Weston, Brett Weston devoted his entire life to photography, experimenting with various printing processes and exploring a wide range of themes and contexts to create a unique body of work that transcends comparison to his famous father's images. Although he acknowledged his father as a huge artistic influence and admired the work of other photographers including Paul Strand, Charles Sheeler, and Henri Cartier-Bresson, Weston was also greatly inspired by artists working in painting and sculpture such as Georgia O'Keeffe (whom he once proclaimed as the greatest living American painter), Constantin Brâncuși, and Henry Moore.

Weston made his first photographs in 1925 with his father's second camera, a 3 ¼ x 4 ¼ inch Graflex. From the beginning Weston saw beauty in the details and the images from this period reflect an intuitive and sophisticated approach to abstraction that would blossom later in his career when he began making pictures with an 8 x 10-inch camera.

Weston’s photographs were gifted to SJMA in 2020 from the Christian Keesee Collection, which contains the Brett Weston Archive and represents the most complete body of the artist’s work in the world. Many of the photographs donated to SJMA are vintage prints, produced in the same year as the image was taken, and a few were printed at a later date by the artist.

Born in 1911 in Los Angeles, Theodore Brett Weston was the second of four sons of Flora Chandler and acclaimed photographer Edward Weston. At age thirteen, Weston became his father's apprentice and traveled with him to Mexico in 1925. Living in Mexico, he was surrounded by some of the revolutionary artists of the day, including Tina Modotti, Frida Kahlo, Diego Rivera, Jean Charlot, and José Clemente Orozco, and began making photographs there with a small Graflex 3 ¼ x 4 ¼ inch camera given to him by his father. For most of his life, Weston resided primarily in Carmel, California, where the family had moved to in 1929, and worked in Los Angeles, New York, South America, Europe, Japan, Alaska, and Hawaii. His photographs have been the subject of numerous exhibitions, publications, and films, and are held in the collections of The Art Institute of Chicago; Carnegie Museum of Art, Pittsburgh; Center for Creative Photography, Tucson, Arizona; High Museum of Art, Atlanta; Honolulu Museum of Art; International Center for Photography, New York; J. Paul Getty Museum, Los Angeles; Metropolitan Museum of Art, New York; The Museum of Modern Art, New York; National Gallery of Art, Washington, DC; Philadelphia Museum of Art; Santa Barbara Museum of Art; San Francisco Museum of Modern Art; Smithsonian American Art Museum, Washington, DC; and Whitney Museum of American Art, New York. Weston died in 1993 in Kona, Hawaii.

Brett Weston is supported by the SJMA Exhibitions Fund.