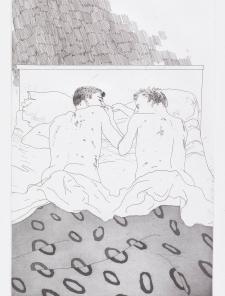 Expanded Graphics New Acquisitions and Works from the Collection, with Two Films by James Scott Hockney/Hamilton

Films about art can make art seem small and banal, but they can also expand and enlarge it—like the first films by the British art film pioneer James Scott (*1941). The Museum Ludwig will bring them into a dialogue with the works they feature: David Hockney’s Illustrations for Fourteen Poems by C.P. Cavafy (1966) and works by Richard Hamilton. The Cologne-based collectors Herbert Meyer-Ellinger and Christoph Vowinckel donated this series of works by Hockney to the museum in 2016. Now it is being exhibited for the first time, along with works on paper by Hockney and Hamilton from the collection, supplemented with loans from private collections.

Illustrations for Fourteen Poems by C.P. Cavafy comes from an early creative phase that was central to David Hockney’s development. This portfolio brings together three subjects of Hockney’s art: his interest in the expressive possibilities of prints, the question of the relationship between literature and visual art, and the markedly self-evident portrayal of homosexuality in a dominantly heterosexual society.

Richard Hamilton was one of the earliest representatives of British Pop Art. Hockney painted his portrait, and in 1971 both artists protested against admission fees for British museums. Hamilton’s prints carry out subversion through affirmation, distilling banal elements of popular culture (celebrity worship, advertising, postcards) in order to reveal the emptiness behind the abundance, the horror behind the kitsch.